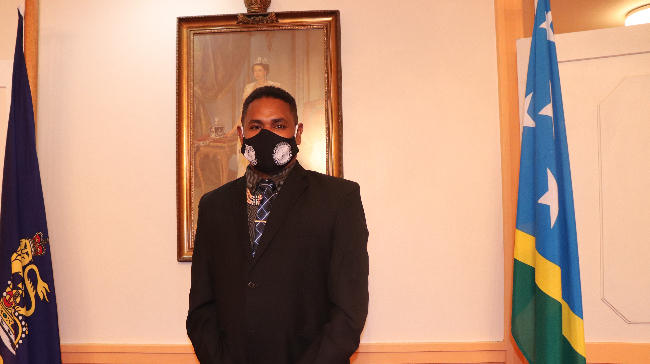 SIEO Operation Manager, Mr. Fredrick Bosoboe was this morning, in a brief ceremony, sworn in as the Acting Chief Electoral Officer and Commissioner by His Excellency the Acting Governor General Hon Patteson Oti at Government House.

A brief introduction and welcome meeting this morning after the swearing-in ceremony was held at the Electoral Office, Mr. Bosoboe was humbled, but grateful for the recognition and recommendation to be appointed Acting CEO and Commissioner by the Commission and he looked forward to working with the team as usual to execute SIEO mandated activities during his time as acting CEO.

“I am humbled to take on this appointment as Acting Chief Electoral Officer and looking forward to continue working with the team as usual including our internal and external electoral stakeholders,” Mr. Bosoboe said.

Mr. Bosoboe is an electoral professional and from his wealth of knowledge and experience in election administration in Solomon Islands, he has gained a great deal of respect from the SIEC, SIEO colleagues and election field Officers.

The SIEO’s team often refers to him as our ‘go to person’ when it comes to our electoral processes and systems in the Solomon Islands context.

As the current Operation Manager, he is responsible for organising all electoral events and operational aspects for each electoral event for the SIEO. A wide range of experiences over past nationwide voter registration exercises, national general elections, provincial and city council elections, spanning over more than 17 years of electoral experience locally, regionally and internationally.

The appointment of Mr. Bosoboe is very crucial and timely for the Electoral Office as it prepares for and conducts various electoral events in the coming months.

The position of the CEO was left vacant in April when the former CEO, Mrs. Jane Waetara, resigned to take up another appointment as Solomon Islands Permanent Representative to the United Nations Ambassador to the United States and High Commissioner to Canada.

It was a valuable set of discussions and investment of time as it was appreciated by participants for given the opportunity to share and freely express their views on the electoral reform agenda items that is currently in consultation nationwide.

The consultation continues and the Electoral Taskforce team will be leaving today (Friday 3rd June) from Honiara for Isabel Province, on their third provincial consultation program scheduled for the 6th and 7th of June, 2022.

Returning Officer, Mr Fred Warereau said that polling went on smoothly with no disturbances to the voting process.

Mr Warereau said that all set up was done in time and all polling stations were opened and closed on time.

“It was a quiet and peaceful day with a fair turned out. Voters turn up to cast their votes without influence”, Mr Warereau said.

Counting of votes is expected to start as soon as all the ballot boxes arrives at Rove Police Club this evening.

Due to covid-19 compliance measure, we discourage crowding at the counting venues.

Then you Election Official and HCC by-Election Team and Electoral Commission Staff the logistic and support for making this a success polling day.

Electoral Taskforce Sets off to Makira

The Electoral Reform Taskforce will continue its consultation program with stakeholders in Makira province on the 23rd and 24th of May, 2022.

The team leaves today Friday 20th May for Kirakira ahead of the program.

This would be their second of its series of consultation programs to seek peoples’ view on major reform areas that are in the Solomon Islands Electoral Reform Strategic Framework (2019-2023).

The team will present and discuss relevant section of Honiara City Council Election Act 1999, Provincial Government Act 1997 and Electoral Act 2018 on areas where these laws can be synchronized for a possibility for combine election.

Combine elections will allow voters to go to the poll casting two votes at the same time to elect their Parliament Member and Provincial Assemblies Member or Honiara City Council Councilors on a day election.

It is also aim at discussing proposed amendments to some sections in the Electoral Act 2018 to improve efficiency and effectiveness in the delivery of election services in future elections.

At the moment, each level of election conducts its election under different law hence, each has different timeline and polling day.

It’s always been a two sides argument to these proposed amendments and it is up to the people to give their view on both arguments.

Election is a process that provides the opportunity for citizens’ say in the development Policies of this country through elected leadership and hence it is a must and crucial action that people are consulted and be part of this law-making process.

Representatives from stakeholders within Makira Province are urged to present and give their views on these major reforms.

The first consultation program was held earlier this year with stakeholders from Central Islands Province.

The Office of the Solomon Islands Electoral Commission in its preparation towards the By-Election for Vuhokesa Ward, Honiara City Council is seeking to recruit temporary Election polling officials to work as Presiding officers, Polling Assistants and Queue controllers:

Details on the duties of the position can be obtained from the Solomon Islands Electoral Office, Vavaya ridge or see provided link below.  The closing date for applications, 19th May 2022.

All applications to be addressed to;

The Office of the Electoral Commission upholds the requirement of Equal Employment Opportunity therefore Both men and women are encouraged to apply.

Her official resignation came into effect on Wednesday 13th April, 2022 and steps to fill the vacant post of the chief electoral officer has been taken and in progress.

Mrs. Jane Waetara was formally appointed as Chief Electoral Officer in August 2020 until her resignation early this month, a period of almost 20 months of service for the Commission.

A​​​​lthough Mrs. Waetara served for the shortest time span in comparative to past holders of the CEO post, her strong leadership and achievement immensely felt and impacted the work of SIEC in all aspect.

SIEC would like to thank Mrs. Jane Waetara for her service to the commission and at the same time wish her well in her future endeavors.