All intending candidate have until 10th of August 2022 to physically do their nomination with the Returning Officer< Mr. Pearson Simi, for the by-election.

Nomination center is at Maoa Village within the West Kwaio Constituency.

Nomination will be done electronically  and therefore requiresintending candidates  to do their nomination to physically present at the nomination center so that their photos can be captured to be printed on  the ballot paper.

Mr Bosoboe call on all intending candidates to note that, all nomination must be done by 4pm Wednesday 10th of August, 2022.

“Along section 62, It must end 24 hours before the polling day.”

Mr Bosoboe said that, the law remains the same and therefore, the penalties for breaching these election offenses remain unchanged.

He appealed to all good voters of  West Kwaio Constituency to continue to support the election process towards polling day.. 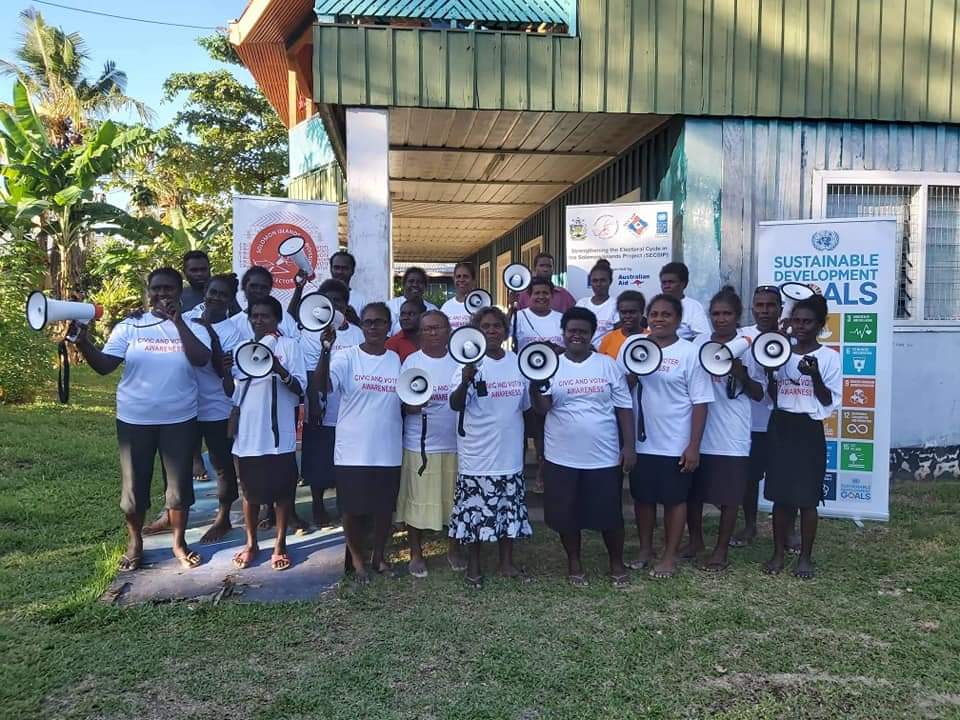 “If only voters are informed with correct information that should help them to participate fully, and if only voters understand electoral processes and systems that assures them of their security and secrecy of their votes and participation, they can be confident and motivated to freely exercise their right by casting an informed and correct vote for a desired leadership”.

“And if only awareness teams are well trained and given the right information, supported with adequate resources to enable them to reach individual communities and hold well-presented awareness information sessions, then we can be assured that voters will be informed and be able to vote wisely”

These are the words of the Civic and Voter Awareness training workshop facilitator Mrs Philothea Paul during the Workshop in Gizo last week.

“These are the key objectives of this 4 days training workshop”, Mrs Paul said

It was an intense four (4) days training delivery as civic teams from Choiseul and Western Provinces are equipped with theoretical content and practical sessions in preparing them for the planned provincial wide face to face civic and voter awareness program in the next couple weeks.

Civic and voter awareness teams have worked, walked and talked it through in understanding a full electoral knowledge information package covering topics from governance and election, gender and social inclusive, planning, budgeting and finances including introductory chapters on preparations and delivering a face-to-face awareness program.

It was a great deal of learning new knowledge acquired during the training, as many has attested to and have expressed in the training evaluations. It is also an eye opener for many and the Electoral Office has been able to gain more confidence in its electoral processes.

“When I heard people talking about election, the first thought that came to my mind is corruption and this workshop is an eye opener for me as I now come to understand the processes of election “Mrs Freda Moveni from North Vella la Vella shared her sentiment after the training.

“All I do is cast my ballot paper in exercising my right to vote without understanding what it means. From this training, I now came to realise that its more than casting a vote. I now understand and be able to link my vote to the bigger picture in governance and leadership”, Mr Jeff Nick of North East Choiseul Constituency also expressed.

Both provincial teams are expected to deploy into their respective constituencies over the weekend to start conducting awareness programs in the communities from 26th July to 17th August, 2022.

The civic teams will move in advance of the registration and election teams with all civic and voter messages, preaching the importance of participating, exercising their rights taking part in the higher decision-making process with their ballots in a correct way.

The teams will be moving ahead with the voter registration BVR team movement schedule, to pin up in communities to aware people on when the teams will be coming to and closer to their villages.

They will advance with the message to eligible registrants who require to register for the first time and those who need to updated their voter details to be able to do so when the teams come around to their villages and communities, encouraging them to register.

Registration is a must to exercising your voting right is one of the messages as the law requires a voter to appear on the voter list on a polling day before be able to be given a ballot paper to make her choice in choosing his/her representative on a poling day, Mrs Paul said.

“The message on what it means with the phase ‘the power of the ballot paper’ and What it means, ‘to updating your voter details and what to do’ are some of the messages that these team will be preaching during their visits in the communities”, She adds.

It is a complete pack for voters to be informed on information that will motivate them to participate in the democratic process of election.

Mr Bosoboe, Acting CEO, highlighted that to have face-to-face awareness programs are never cheap in the context of Solomon Islands and to bring such programs to Choiseul and Western Provinces with many scattered Islands will be logistically challenging.

In enabling this important project to roll out to our communities in Choiseul and Provinces, Solomon Islands Electoral Commission greatly appreciates the continuous support from its UNDP Project Strengthening Electoral Cycle in Solomon Islands Project - SECSIP for co-funding this face-to-face awareness program.

SIEO urged communities in and around Western and Choiseul Provinces to look out for these awareness groups to support and receive them into their communities.

For enquiries, you can also call the enquiry line on Phone 7222200. 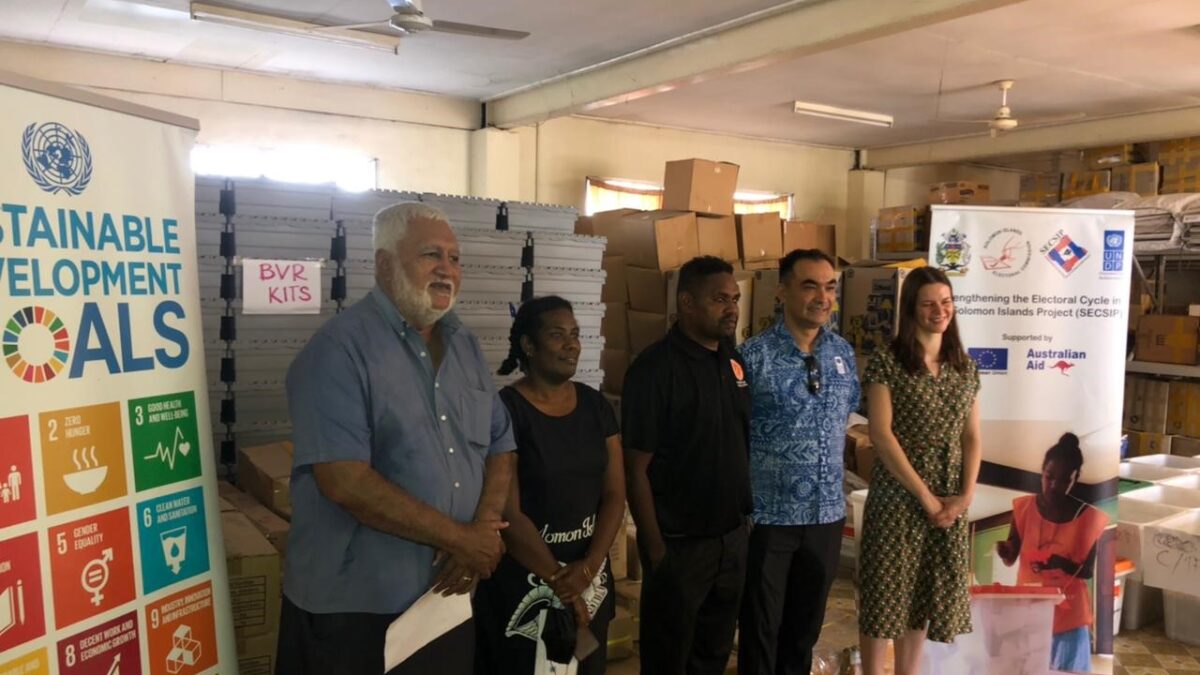 Two boats with OBM and other Election Support Items were handed over to the Electoral Commission by UNDP Deputy Resident Representative and Country Manager, Mr Berdie Berdiyev and First Secretary to the Australian High Commission in a brief Ceremony earlier this week at Electoral Office’s warehouse. The ceremony was witnessed by all staff at the Solomon Islands Electoral Office and the SECSIP Project.

Speaking during the handing over ceremony, Mr. Berdiyev acknowledged the Government of Australia, the UNDP major donor partner to the Strengthening Electoral Cycle Solomon Island Project (SECSIP). SECSIP through financial commitment by Australia and UNDP will continue to provide its support to the Commission in achieving its main areas of project outputs, Mr Berdiyev pledged.

Similar sentiments were offered by the First Secretary of the Australian High Commission, Mrs. Kellie Raab, of its ongoing support to the Commission.

“Australia Government and UNDP through SECSIP has been supporting the Electoral Commission in fulfilment of its roles and responsibilities”. Mr Bosoboe said.

“I am grateful to the SECSIP/UNDP and the Australian Government for continuously coming to our aid”, Mr Bosoboe uttered.

Mr Bosoboe said that such assistance is timely as SIEO gears up to administer voter registration update in Western and Choiseul Provinces commencing in August 2022 and their provincial assembly elections that will follow suit in December”.

“Voter Registration Centres and polling stations within these two provinces are only accessible by sea transport and is not cheap. Boat hire makes up a considerable expense for Provincial Election Budgets during Electoral events and with the rising fuel prices surge in goods and services in the country, such cost-effective form of assistance will save monies intended for hiring of boats”, Mr Bosoboe said.

“A truly cost cutting assistance and we want to thank you”, Mr Bosoboe reiterated.

In the bigger picture, this is not only cross cutting but it is in line with the Commission’s plan to also establish its provincial election offices in all provinces.

This assistance also allows SIEO staff to soon take possession of new laptops and ICT equipment which will upgrade and enhance staff’s capabilities in carrying out their work.

With our recent upgrade of our office network and the installation of the fibre optic connection, we are optimistic our electoral services will soon go online.

“To our donors, we sincerely appreciate your support in equipping my team at the SIEO. Mr Bosoboe concludes

SECSIP’s funding support to the Electoral Commission has since 2014 is consistently provided and has achieved number of major projects which includes support towards the implementation of the biometric voter registration system and the elections in 2014 and 2019.

Such support has enabled Solomon Islands Electoral Commission to successfully introduced COVID 19 preventive and risk mitigating procedures and measures in its electoral processes, training staff and raising awareness amongst the electorate enabling the citizens of Solomon Islands to continue exercising their rights and electing their representatives in 2020 and 2021.

SECSIP III is an example of a successful collaboration where the efforts of the Solomon Islands Electoral authorities, UNDP SECSIP and Australia have been put together to continue advancing in the consolidation of democracy and the 2030 Sustainable Development Goals.

In development towards achievement of these goals; together as partners; SIEO will continue to acknowledge and support such form of donor assistance for enhancement and strengthening the delivery of election services in the country. 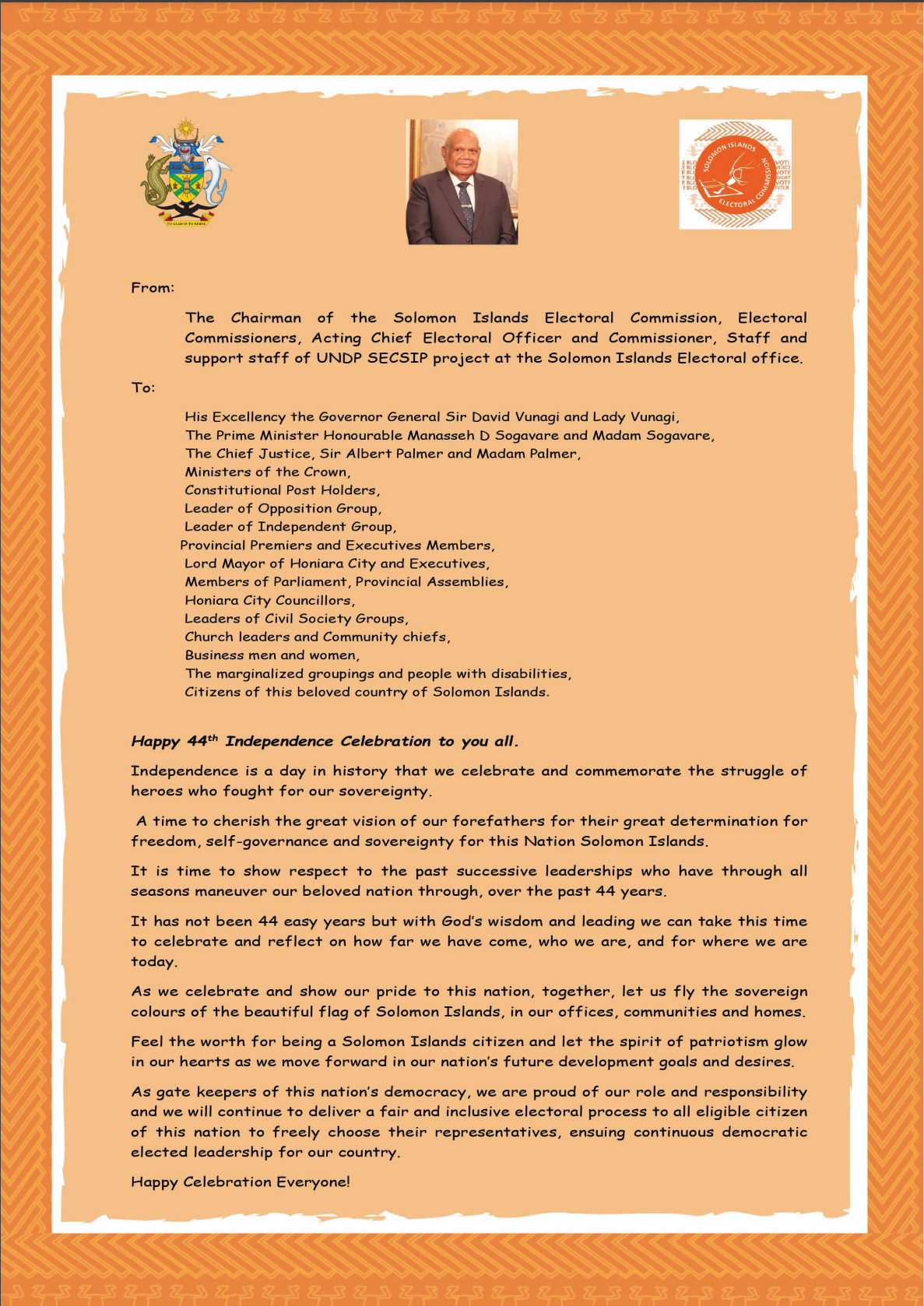 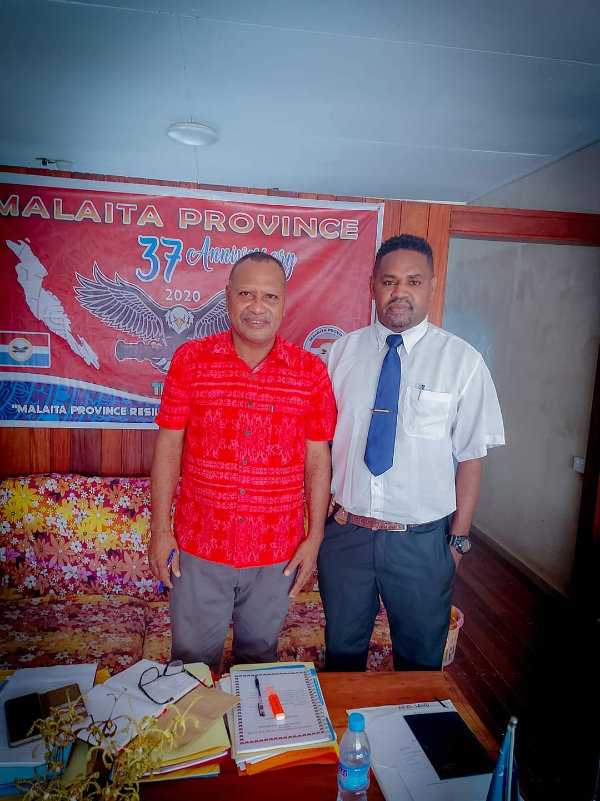 As part of the deployment of the SIEO training team to Auki for the election training of senior officers for the West Kwaio Parliamentary by-election and the Waneagu Taelanasina Ward 18 Provincial by-election, the Acting Chief Electoral Officer, Mr.Fredrick Bosoboe made a courtesy call to the Hon. Premier of Malaita Province this morning, 4 July 2022.

The Hon. Premier was briefed on the 2 by-elections eventuating in the Province, preparations, and acknowledging the support of the Province to the Commission in delivering these by-elections.

The brief courtesy call was witnessed by the DPS and Acting Provincial Secretary for Malaita Province, Mr.David Filia Tuita who is also our Election Manager for the by-elections. 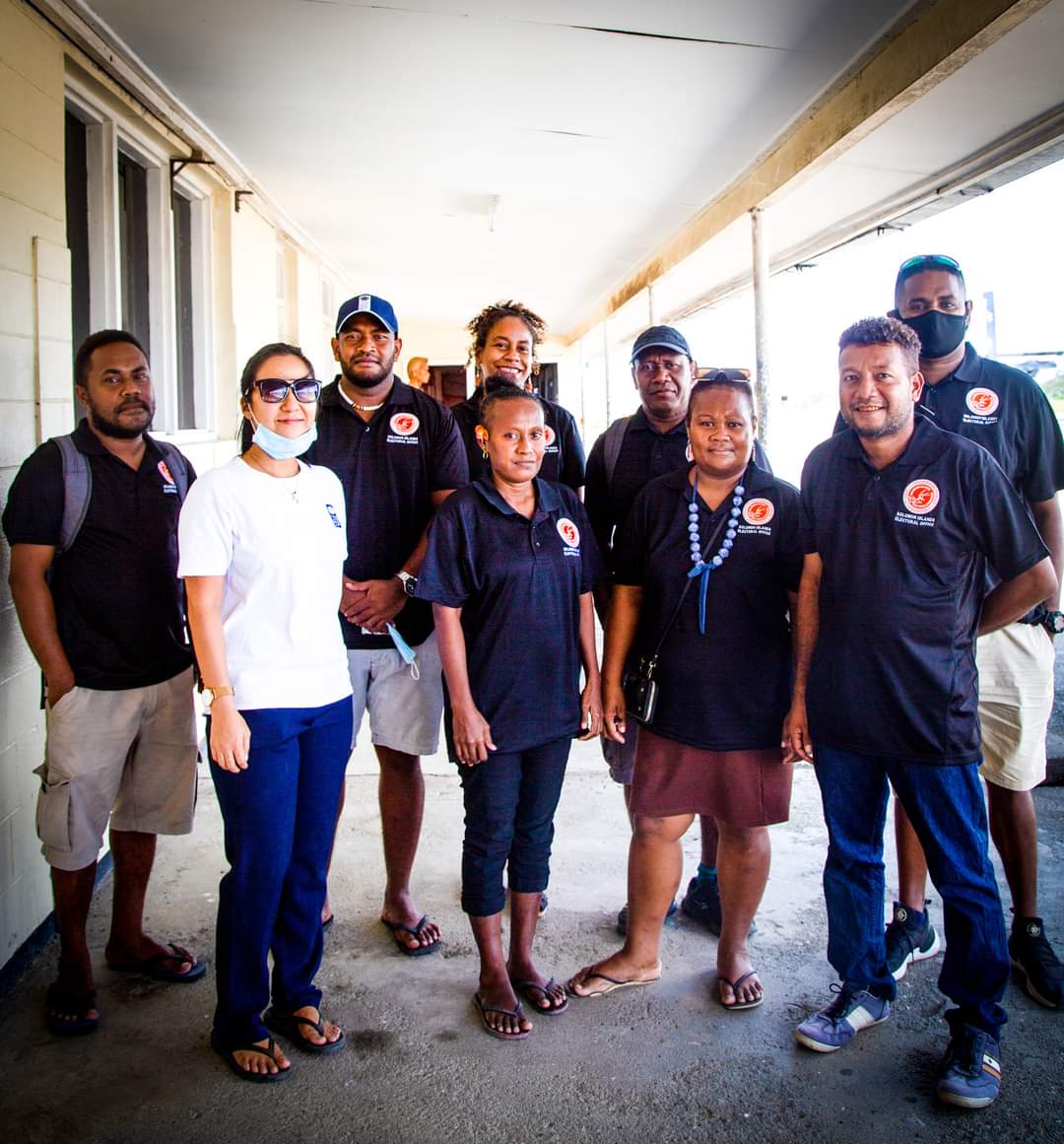