The Solomon Islands Electoral Commission would like to invite interested groups or organizations who wish to participate in election observation for the upcoming by-elections for West Kwaio constituency to submit their interest in writing to the Chief Electoral Officer.
Applications must be in a group or organization as individual applications will not be accepted. Only the Solomon Islands Electoral Office will accredit observation groups.

Accredited election observation groups or organizations are solely responsible for funding all its Election Observation activities.

All applications must reach the office of the Chief Electoral Officer, Solomon Islands Electoral Office, Vavaea Ridge, before the 10th of September 2022.
Solomon Islands Electoral Commission would like to inform interested observer groups that all post covid-19 electoral events still observes COVID 19 health measures. All candidate agents, scrutinizing the election and election observation personnel both international and domestic must adhere to these measures. The commission will demonstrate its support towards assisting any key observation in this upcoming by-election to instill confidence in the conduct of elections.
Accreditation forms are available online and can be downloaded from SIEC official website: www.siec.gov.sb (See below link) or can be requested through email from the liaising officer or can also be collected at the Electoral Office, Vavaea Ridge.

All complete application must return to the Observer Liaison Officer –

If forms are returned by email, please contact the Observer Relations
Officer at the SIEC on 21198/21199 to verify and confirm receipt.

FORM A Application for accreditation of electoral observer group

FORM B Application for registration of electoral observers

The consultation with Guadalcanal Province was held on the 14th and 15th of July.

Hon. Premier for Guadalcanal Province in his remarks during the opening, welcomed the Taskforce and highlighted that “if we want change to strengthen our electoral process, this is the opportunity for us to contribute to make a positive change.”

In response the Chairman of the Electoral Commission Mr. Patteson John Oti acknowledged the Hon. Premier’s welcoming remarks and highlighted that the objective of the consultations was to hear the frank views of the Provincial Assembly members and the wider community representatives on the proposed concept of holding simultaneous elections and the proposed amendments to the election laws.

Mr. Oti said that, this Electoral Reform is founded on the strive for enhancement and strengthening the integrity and delivery of the electoral process in the country and it is a priority of the Electoral Commission and the Government.

During the consultations, one participant highlighted the importance of this consultation and reform.

“Initially I was against the combined or one day election but now I have been won over.  The synchronizing of all elections to happen in one day is a positive change”, He expressed.

He urged everyone who were part of the consultation to share this positive change in their respective wards and villages.

The Taskforce and the Commissioners were grateful for the overall support and invaluable contributions made by the Guadalcanal Provincial Assembly members and the wider community representatives.

Followed on, on the 27th July 2022, the Taskforce consulted the Honiara City Council.

The Honiara City Deputy Mayor in his opening remarks prudently advised the Electoral Commission, the Taskforce and the Honiara City Council that such reforms are very important and must be thoroughly examined.

“We support the move but at the same time, must be mindful not to create opportunity that will negatively impact our life”, the Deputy Mayor said.

The Honiara City Deputy Mayor said that it is important that we do not compromise election just because lack of fund.

Electoral Commissioner Mr Stanley Pirione acknowledged the sentiments shared by the Deputy City Mayor and assured the Members of the Councils and the Taskforce that, such reform was part of the Commission’s mandate and will continue to work on such reform.

“As technology advances and standards of living change, such change to the law is timely and the Council is very happy to be consulted”, Deputy City Mayor highlights.

“My council is hoping that the outcome of the consultation will provide a level playing field for all the parties involved”.

The idea of synchronization is to have all levels of elections held in one day, however, this needs consensus between these three levels of governing legislatively.

Four provincial governments and Honiara City Council have now been consulted. There are five more provinces to go.

Generally, feedbacks from the five provinces were fair and views shared and trend of discussions have becoming clear.

The remaining provinces are: -

The next province to be consulted is yet to be confirmed, however, the Taskforce is eager to consult the remaining provinces in 2022 except for Western and Choiseul Provincial Assemblies who will be consulted in year 2023 after their general elections in December 2022.

Names and Symbols of Six (6) Successful nominated candidates who will contest the West Kwaio national parliamentary Seat on the 21st September, 2022.

There were five (5) male candidates with  one (1) female of which 2 were party candidates and 4 will contest as independent. 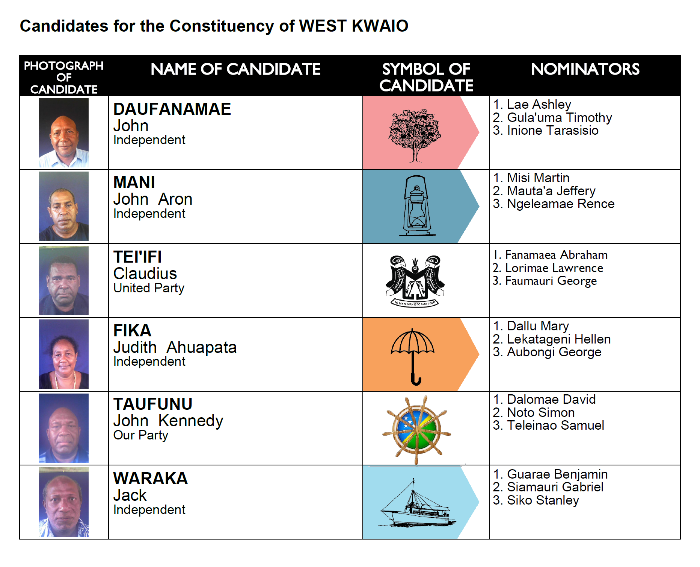 The candidate nomination period  for the by-election was opended from 27th July to 10th  August, 2022. A period of 7 days.

Six (6) Candidates were duly nominated by the close of nominations this afternoon. There is  one (1) female and five (5) males.

Here are the names of candidates nominated.

A ballot paper draw was also held following the closure of nominations to determine the candidate standings order on the ballot paper. The draw was witnessed by candidate representatives, the election manager and election officials together with the public in and around Maoa Village in West Kwaio.

Candidates have until the 12th  of August to withdraw their nomination if  they have changed their intention to contest in the election.

The Solomon Islands Election Commission wants to remind candidates that while doing their campaign, they must keep track on their campaign expenditures as each will have to file a  statement of expense account on any cost relating to election campaigning.

It is required by law that  candidates must file those expense account  along with disclosure of any financial assistance rendered towards their election campaigning activities.

To cast an informed vote, it is important that constituents take the chance to listen to campaign rallies organized by candidates.

We have completed training for our ARO-Data this evening at the Multi Purpose Hall Conference Room.

The 2 days training program was aimed to equip our officers to be able to capture voter details and process data when registering eligible voters during the upcoming Western and Choiseul Provinces voter registration update.

Each of the officers will be deployed to respective constituencies for the voter registration update. The update begins 2nd August 2022, for not more than 21 days in the field.

The training was conducted by our trainers from the Training Unit and the Datacenter Unit.

We wish our officers all the best in carrying out their duties.